As a data scientist, you will almost always be working exclusively with dataframes. But there are occasions when you will need other complex data structures – lists and matrices – to get a job done.

Here we show you what these data structures are like, how to work with them, and when to use them.

Think of lists as complicated vectors. Instead of being a set of single values, which is what a vector is, a list is a set of complex data structures. In fact, a better analogy may be that lists are like shopping carts. You can put a lot of different things in there.

To see what we mean, stage an empty list:

Now add a simple vector to it:

Now add a dataframe to it.

Okay! Nice shopping spree. Let’s see what we have:

This is a list: a lot of complicated data structures, all contained in a single variable.

You can do the same with lists within your list:

Use cases for lists

Common use cases for lists include:

Matrices are like dataframes, except that they can only contain a single data type. Dataframes can have a column with text and another with numbers, but a matrix will only handle one type.

When you coerce this dataframe into a matrix (using the function as.matrix()), the numeric data get coerced into text:

Other than that, you can treat a variable of class matrix similarly to a dataframe.

Subsetting is the same: matrix[rows,columns]

To build a matrix from scratch, use the matrix() function.

The data input takes a vector of data and sorts it into a matrix with rows and columns. It starts “laying down” your data in the first column, then wraps to the second column, etc.

You can also define names for the rows and columns in a matrix:

Note, however, that you cannot subset a matrix according to their column names. mx$col1, for example, will not work.

The diag() function comes in handy in most use cases for matrices in R (see next section).

Use cases for matrices

Common use cases for matrices include:

To practice the latter use case, let’s build up a simple matrix using a random number generator: 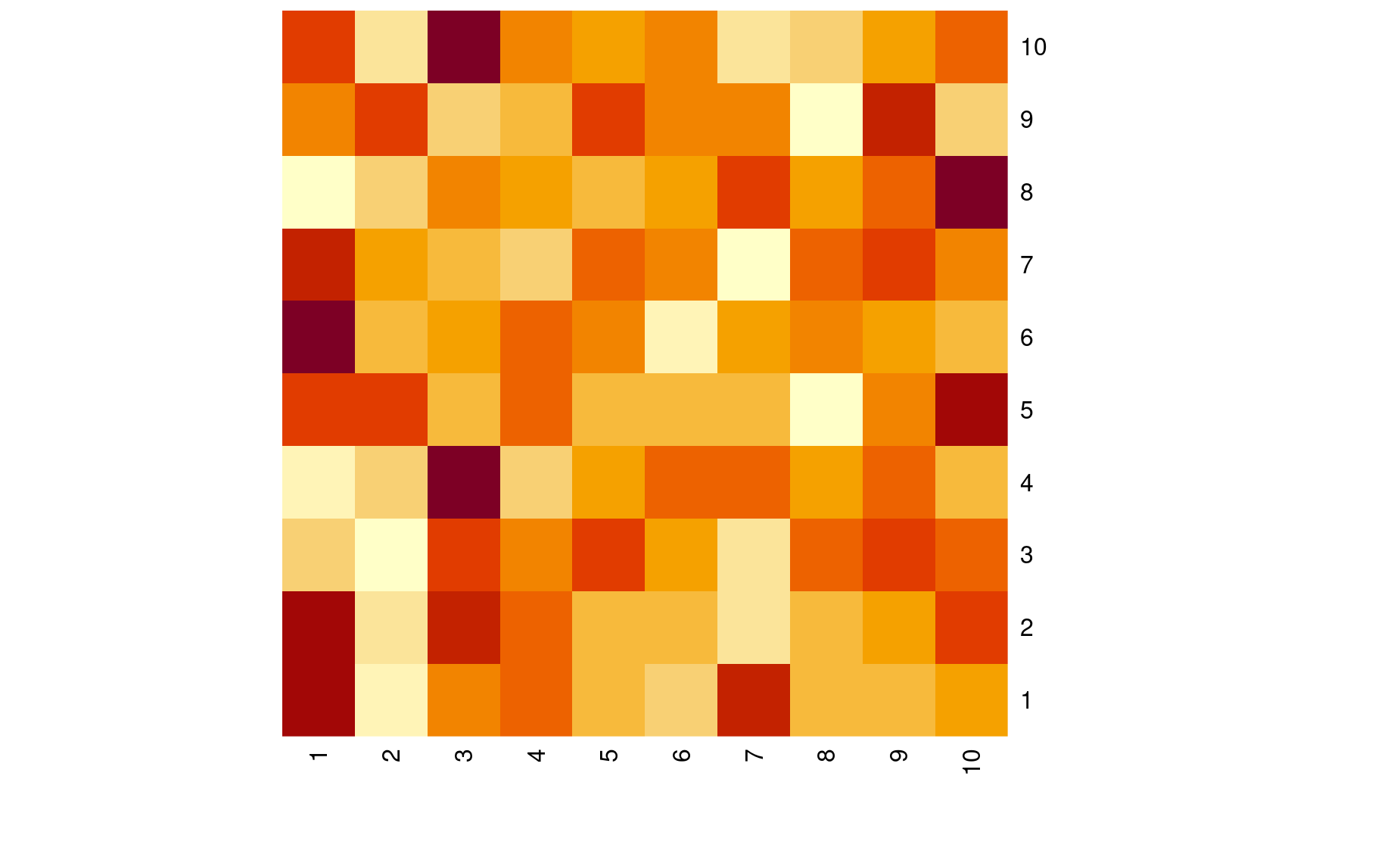 To see a real-world example of a matrix in action, here is a dataset containing rates of social associations, scaled between 0 and 0.5, among humpback whales in the fjords of British Columbia, Canada: humpback-sociality.rds.

Let’s look at the first 5 rows and columns of this dataset:

Also note that the row names and column names are the same. Each element in the matrix is the rate of association between the row’s whale ID and the column’s whale ID. This means that all of the values along this matrix’s diagonal will be 0.5, which is the max association rate in this example:

The fact that this matrix is symmetrical with identical rows and columns also means that all the data in the bottom half of the matrix (i.e., below the diagonal) are the mirror image o the data in the top half.

Look again at the first few rows and columns:

If we don’t like the fact that the diagonal has large values (after all, it doesn’t make much sense to quantify how much an individual associates with itself), we can use the diag() function to replace those diagonal values with NA:

Now that we’ve cancelled out the diagnoal, a heatmap of this dataset will show us which whales are involved in the strongest social associations: 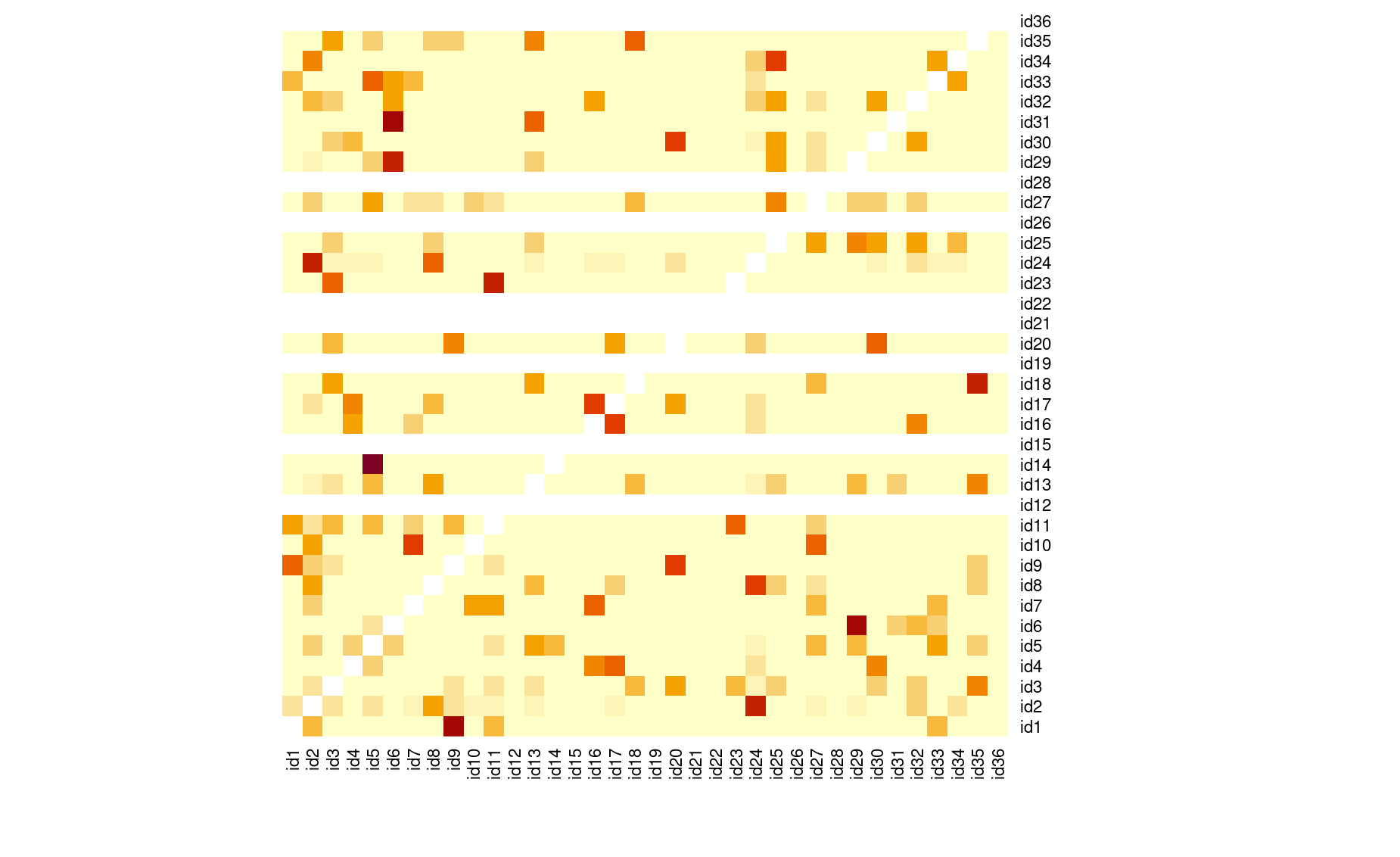 Write a function that uses for loop techniques to convert any matrix, such as the sociality matrix above, into a dataframe. This dataframe must have a row for each value in the matrix, with three columns: row_name, col_name, and data.

The output of your function must be a list with two elements, raw_matrix and df (which contains your new dataframe).

Demonstrate that your function works using the sociality dataset above.

Then, write a function that reverses your work: this new function will take the dataframe output of your first function and revert your dataframe back into a matrix. The output of this function will also be a list with two elements, raw_df and matrix (which contains your new dataframe).

In this function, include an input option giving you the choice of setting the diagonal in your matrix to NA.