R and RStudio: what’s the difference?

These two entities are similar, but it is important to understand how they are different.

In short, R is a open-source (i.e., free) coding language: a powerful programming engine that can be used to do really cool things with data.

R Studio, in contrast, is a free user interface that helps you interact with R. If you think of R as an engine, then it helps to think of RStudio as the car that contains it. Like a car,RStudio makes it easier and more comfortable to use the engine to get where you want to go.

R Studio needs R in order to function, but R can technically be used on its own outside of RStudio if you want. However, just as a good car mechanic can get an engine to run without being installed within a car, using R on its own is a bit clunky and requires some expertise. For beginners (and everyone else, really), R is just so much more pleasant to use when you are operating it from within RStudio.

At this point it may be useful to show the students what opening R looks like on its own (not through RStudio). This helps them see why RStudio is valuable, and it will also help them understand what they did wrong when they accidentally open an .R file in R instead of RStudio – which will happen a lot at first.

RStudio also has increasingly powerful extensions that make R even more useful and versatile in data science. These extensions allow you to use R to make interactive data dashboards, beautiful and reproducible data reports, presentations, websites, and even books. And new features like these are regularly being added to RStudio by its all-star team of data scientists.

That is why this book always uses RStudio when working with R.

When you open RStudio for the first time, you will see a window that looks like the screenshot below. 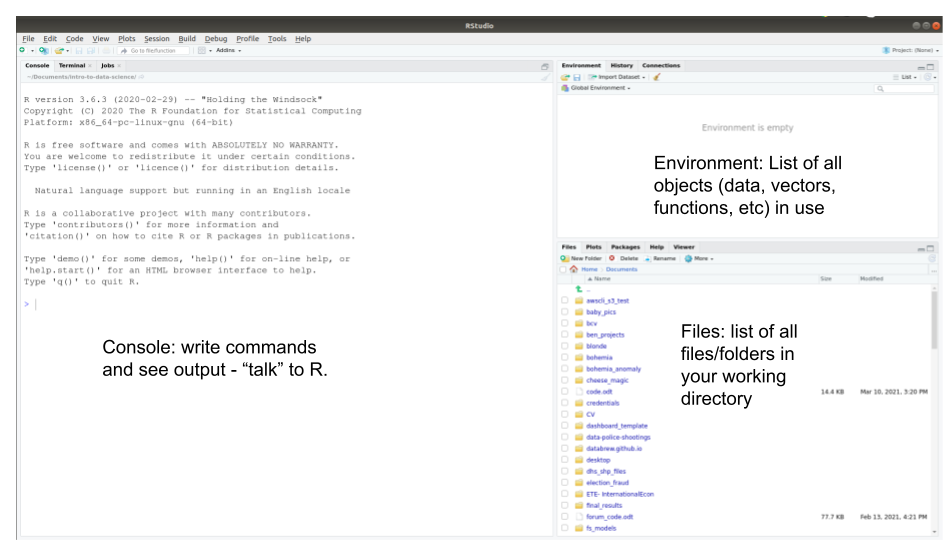 You are already acquainted with RStudio’s Console, the window pane on the left that you use to “talk” to R. (See the previous module.)

In the top right pane, the Environment, RStudio will maintain a list of all the datasets, variables, and functions that you are using as you work. The next modules will explain what variables and functions are.

You will use the bottom right pane very often.

These three panes are useful, but the most useful window pane of all is actually missing when you first open RStudio. This important pane is where you work with scripts.

We recommend speeding through this section; students will get to know these features as they become necessary. For now, you should move along to creating scripts as soon as you can.

Before explaining what scripts are and why they are awesome, let’s start a new script.

To start a new script, go to the top left icon in the RStudio window, and click on the green plus sign with a blank page behind it:

A new window pane will then appear in the top left quadrant of your RStudio window: 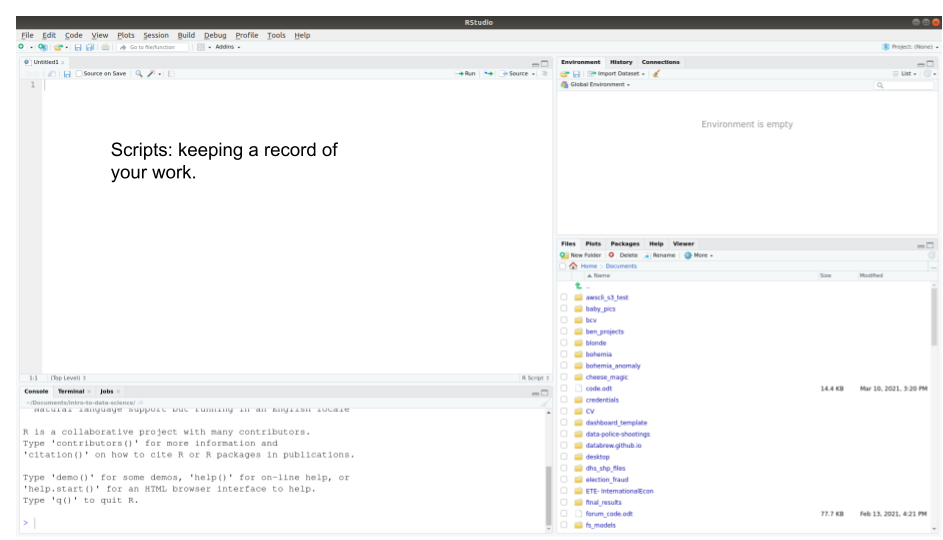 You now have a blank script to work in!

Now type some simple commands into your script:

(To select multiple lines of code, you can (1) click and drag with your mouse or (2) hold down your Shift key while clicking your down arrow key. To select all lines of code, press Command + A.)

Get all students to practice running code at this point. The act of typing the commands themselves helps them learn and overcome their hesitation about messing up.

So let’s build up this script. Add a few more lines to your script, such that your script now looks like this.

Run all of these lines of code at once.

Now add 10 to the first number in each row, and re-run all of the code.

Think about how much more efficient part (B) was thanks to your script! If you had typed all of that directly into your Console, you would have to recall or retype each line individually. That difference builds up when your number of commands grows into the hundreds.

What is an R script, and why are scripts so awesome?

When working with R, you will almost always type your code into a script first, then send it to the Console. You can run your code immediately using Enter + Command, but you also have a script of what you have done so that you can run the exact same code at a later time

To understand why R scripts are so awesome, consider a typical workflow in Excel of GoogleSheets. You open a big complicated spreadsheet, spend hours making changes, and save your changes frequently throughout your work session.

The main disadvantages of this workflow are that:

Consider telling a story from your own work life before you discovered R scripts. For example: receiving versions of Excel files named DATA-final-final-final.xlsx, because tiny changes are inevitably discovered after you try to finalize a data file. Then you work all weekend on an analysis using that data, only to discover you were using the WRONG version of the data!

Working with R scripts allows you to avoid all of these pitfalls. When you write an R script, you are making your work ….

Note that there is nothing fancy or special about an R script. An R script is a simple text file; that is, it only accepts basic text; you can’t add images or change font style or font size in an R script; just letters, numbers, and your other keyboard keys. The file’s extension, .R tells your computer to interpret that text as R code.

Another advantage of scripts is that you can include comments throughout your code to explain what you are doing and why. A comment is just a part of your script that is useful to you but that is ignored by R.

To add comments to your code, use the hashtag symbol (#). Any text following a # will be ignored by R.

Here is the script above, now with comments added:

Adding comments can be more work, but in the end it saves you time and makes your code more effective. Comments might not seem necessary in the moment, but it is amazing how helpful they are when you come back to your code the next day. Frequent and helpful comments make the difference between good and great code. Comment early, comment often!

You can also use lines of hashtags to visually organize your code. For example:

This might not seem necessary with a 5-line script, but adding visual breaks to your code becomes immensely helpful when your code grows to be hundreds of lines long.

R scripts are only useful if you save them! Unlike working with GoogleDocs or GoogleSheets, R will not automatically save your changes; you have to do that yourself. (This is inconvenient, but it is also safer; most of coding is trial and error, and sometimes you want to be careful about what is saved.)

Having grown up in the age of GoogleDocs, many students may not be familiar with what computer files are, and may not even know that their computer operates using directories of folders. It would be useful to open up File Explorer on your demo screen and show them how these directories work.

Step 1: Decide where to save your work. The folder in which you save your R script will be referred to as your working directory (see the next section). For the sake of these tutorials, it will be most convenient to save all of your scripts in a single folder that is in an easily accessed location.

Step 2: In that location, make a new folder named datalab: We suggest making a new folder on your Desktop and naming it datalab, but you can name it whatever you want and place it wherever you want.

Step 3: Save your script in that folder To save the script you have opened and typed a few lines of code into, press Command + S (or Control + S). Alternatively, go to File > Save. Navigate to the folder you just created and type in a file name that is simple but descriptive. We suggest making a new R script for each module, and naming those scripts according to each module’s name. In this case, we recommend naming your script intro_to_scripts.

(It is good practice to avoid spaces in your file names; it will be essential later on, so good to begin the correct habit now. Start using an underscore, _, instead of a space.)

When you work with data in R, R will need to know where in your computer to look for that data. The folder it looks in is known as your working directory.

To find out which folder R is currently using as your working directory, use the function getwd():

Almost always, you want to set your working directory to the folder your R script is in.

How to set your working directory

Whenever you begin a new R script, setting your working directory will be one of the first things you do.

There are three ways to set your working directory: 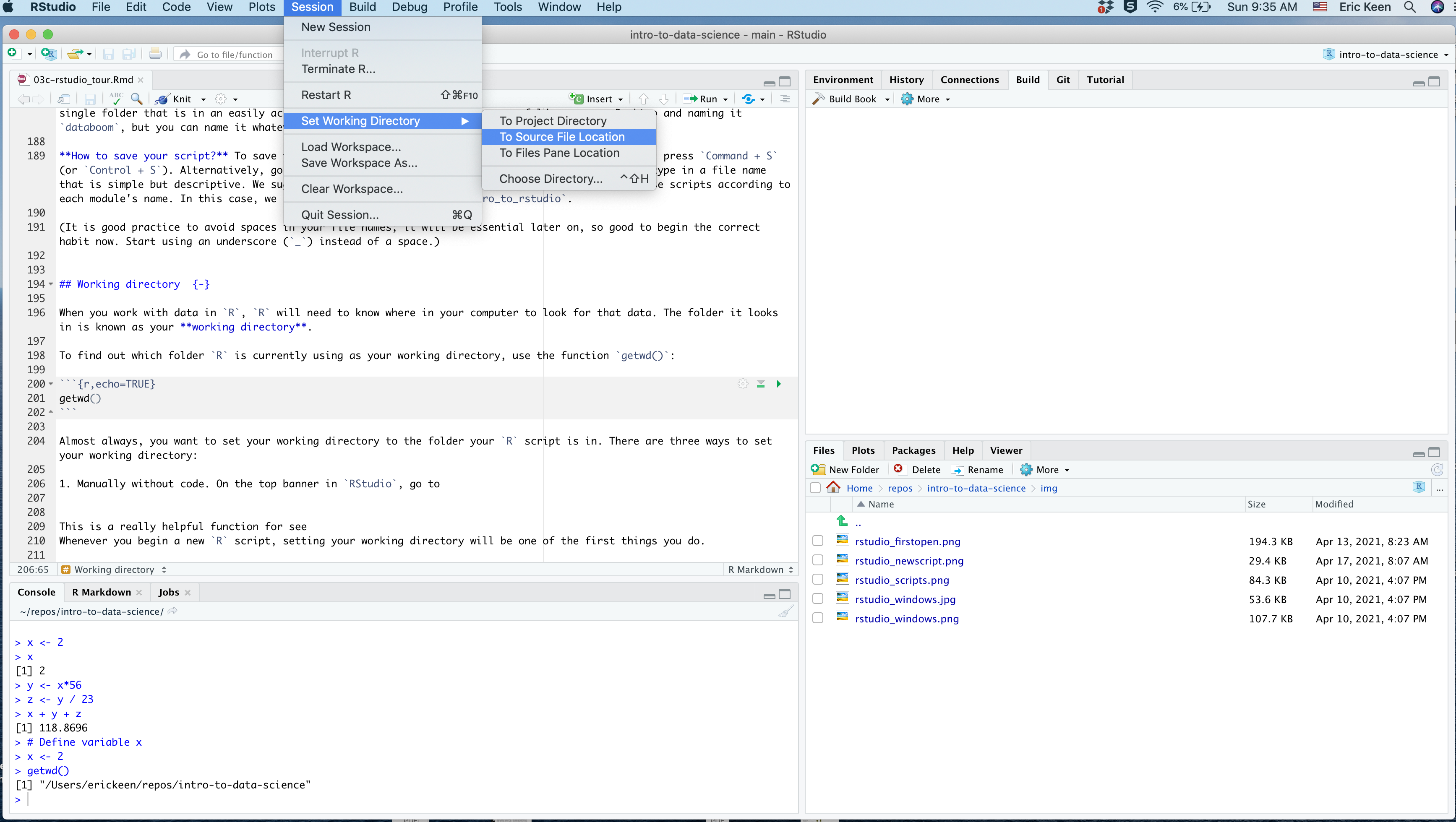 This action sets your working directory to the same folder that your R script is in. When you do this, you will see that a command has been entered into your Console:

(Note that the filepath may be different on your machine.) This code is using the function setwd(), which is also used in the next option. Go ahead and copy this setwd(...) code and paste it into your script, so it will be easy to use next time.

To use this command, you must first install a new package. Run this code:

For now, you do not need to understand what this code is doing. We will explain packages and the library() function in a later module.

You can now copy, paste, and run this code to set your working directory automatically:

This is a complicated line of code that you need not understand. As long as it works, it works! Confirm that R is using the correct working directory with the command getwd().

Now that you know how to create a script and set your working directory, you are prepared to work on data projects in RStudio.

The workflow for beginning a new data project typically goes like this:

In your file explorer…

Here is a template you can use to copy and paste into each new script you create:

1 (if not already complete). Create a working directory for this course. Call it whatever you like, but datalab could work great. Place it somewhere convenient on your computer, such as your Desktop.

3. Now follow the Typical Workflow instructions above to create a script. Save it within your modules folder. Name it template.R. Copy and paste the template R code provided above into this file, and save it. This is now a template that you can use to easily create new scripts for this course.

4. Now make a copy of template.R to stage a script that you can use in the next module. To do so, in RStudio go to the top banner and click File > Save As. Save this new script as variables.R (because the next module is called Variables in R).

5. Modify the code in variables.R so that you are prepared to begin the next module. Change the title, and look ahead to the next module to fill in a brief description. Don’t forget to add your name as the author and specify today’s date.

A Gentle Introduction to R from the RStudio team