Classic significance statistics (i.e., p-values) are based on the frequentist framework in which you estimate the probability of an observed outcome based upon what would be expected if a null hypothesis were true. In a t-test, for example, you are asking, “What are the chances of observing what I have if these two sample sets were not meaningfully different?”

The key word in that first sentence is estimate. When frequentist theory was originally developed, statisticians did not have computers capable of generating vast amounts of random numbers. So they had to estimate p-values by developing strict rules and expectations about the way data are distributed. These rules had the result of (1) placing a lot of constraints on the way statistsics could be done, (2) forcing the development of increasingly specific tests for each novel sampling scenario, (3) confusing students trying to learn statistics, and (4) requiring the use of simplistic conventions, such as the 0.05 significance threshold, in order to make statistical results somewhat intelligible.

In a randomization routine, you shuffle the variables in your dataset to generate a distribution of outcomes that would be possible according to a null hypothesis. Most null hypotheses reduce to an expectation of no meaningful difference between two (or more) samples, which is to say that any differences between those samples are merely the product of random chance. Such randomly generated variability can be simulated easily in R.

Randomization may seem daunting at first, and it does indeed draw upon some of the higher-order skills in your R toolbag (such as custom functions, for loops, and sometimes even the apply() functions), but once you become oriented you will see how intuitive and simple these analyses can be.

The real advantages of randomization, however, are not for the programmer but for the reader. Randomization results are much easier to interpret and more information-rich than frequentist p-values. The advantages are many:

The examples below will show you how to appy this generalized workflow. Note that we are purposefully applying randomization to scenarios in which classic statistical tests, such as t-tests and linear models, could also be used. We do so because those scenarios are relatively simple, they demonstrate the comparability of randomization to approaches you may already be familiar with, and they hint at the advantages of randomization over those other approaches. But the true value of randomization lies in its ability to carry out statistics when all other conventional tests fail; we hint at that value in the final use case.

To practice this use case, let’s use the dataset humpback-whales.csv: 15 years of sightings of humpback whales within a fjord system in northern British Columbia, Canada (www.bcwhales.org).

Each individual whale in this dataset was identified using unique patterns on its tail, so each whale has an ID number.

Each row shows a whale (column id) identified during a single sighting (column sit). Some sightings were of a single solo individual, but others were of groups of two or more individuals.

Our interest here is in these whales’ social behavior: do they have “friendships”, i.e., certain individuals that they prefer to associate with over others, or are they just randomly swimming around and bumping into one another?

Let’s tackle this one step at a time.

Step 2: The null model for this question is simple random mixing: there is no pattern to which whales occur in which group. So the variable that we will need to shuffle is the id column. With this approach, we be able to preserve the number of times each individual is seen and the total number of observations. So the limitations and inconsistencies in our sampling of each individual will be safely propagated into our statistics and properly reflected in the uncertainty of our results.

Step 3: So we need a function that returns the number of times two whales are associated. We will call this function association_tally().

Step 4: For our observed association tally, we will focus in on a single pair of humpback whales: IDs 59 and 11.

That’s alot of associations! Let’s see if that observation is statistically significant:

Step 5: The for loop for our null distribution will look like this:

Note! Here we only iterate our for loop 1,000 times, but most published randomizations are run for 5,000 to 10,000 iterations, just to ensure that the null distribution is adequately unbiased.

Step 6: To visualize these results, use a histogram: 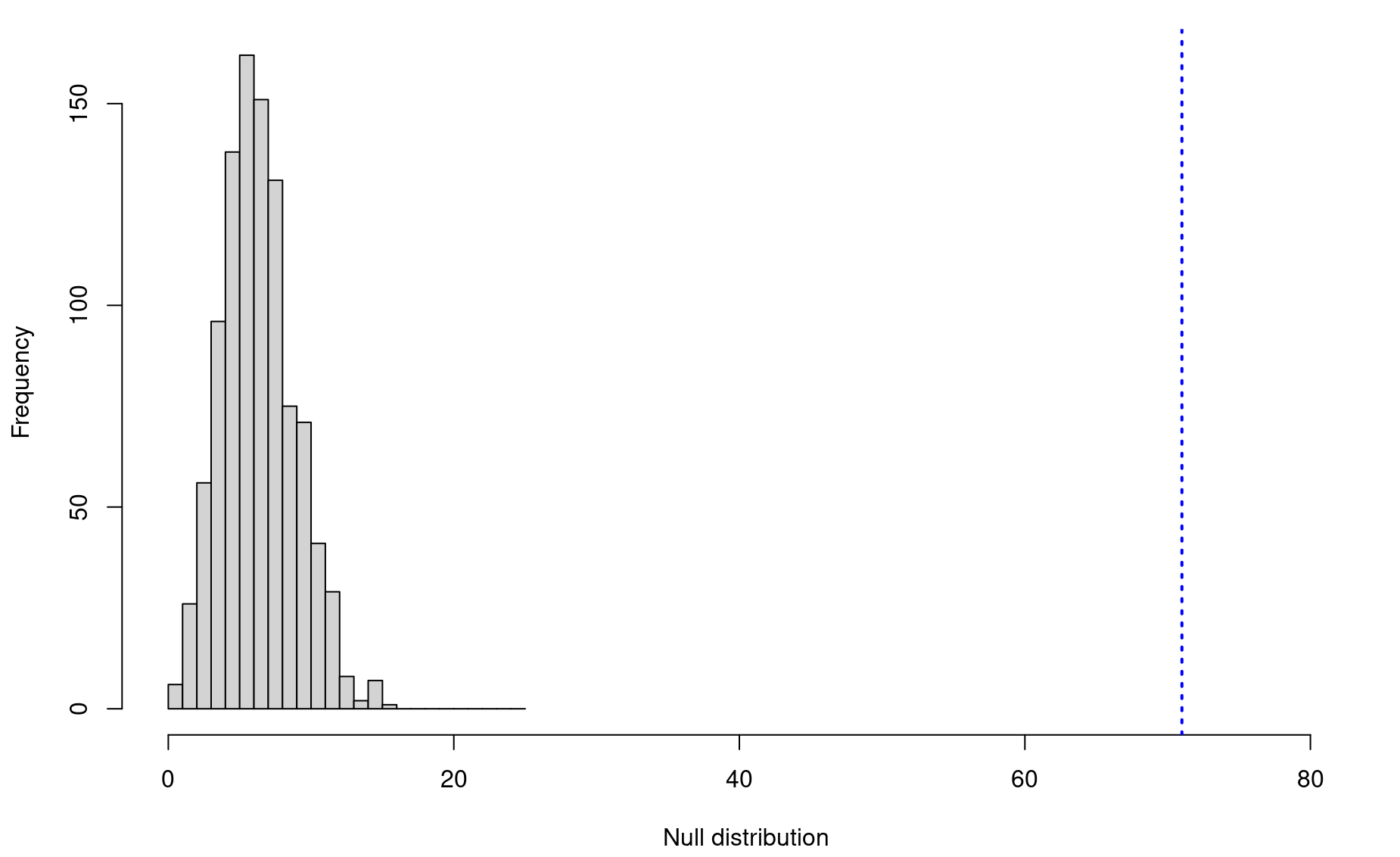 Step 7: Finally, we calculate our p-value:

Let’s do this again with a different humpback pair, IDs 16 and 118, who were seen together only 13 times. Is their association rate statistically significant? 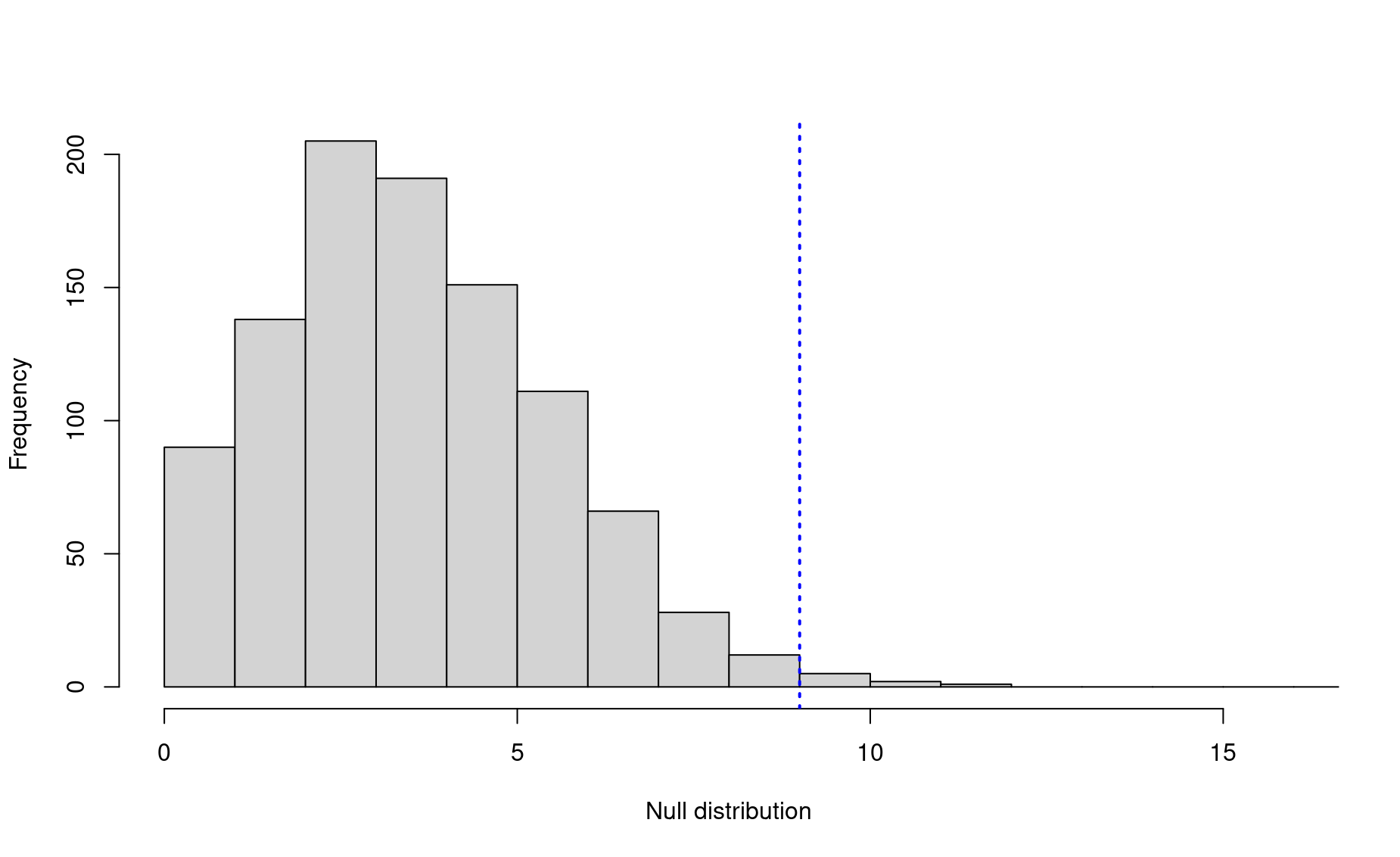 In this case, the observed association rate is still statistically significant at the conventional 0.05 level, but there is still an off chance that this is merely the result of random mixing.

Building off of the whale scenario: Some of these whales have learned how to practice bubble-net feeding, a remarkable feeding strategy that requires group cooperation and special techniques for catching schooling fish such as herring. Other individuals have never been seen bubble net feeding. Are there any differences how often these two populations – the bubble netters and the “others” – use the study area?

First, let’s see how many of these individuals are known to bubble net feed:

So, out of 132 individuals, 108 are known to practice bubble netting.

Let’s go through the steps:

1. Research question: Is there any difference in the number of years in which bubble-netters are seen compared to other whales? 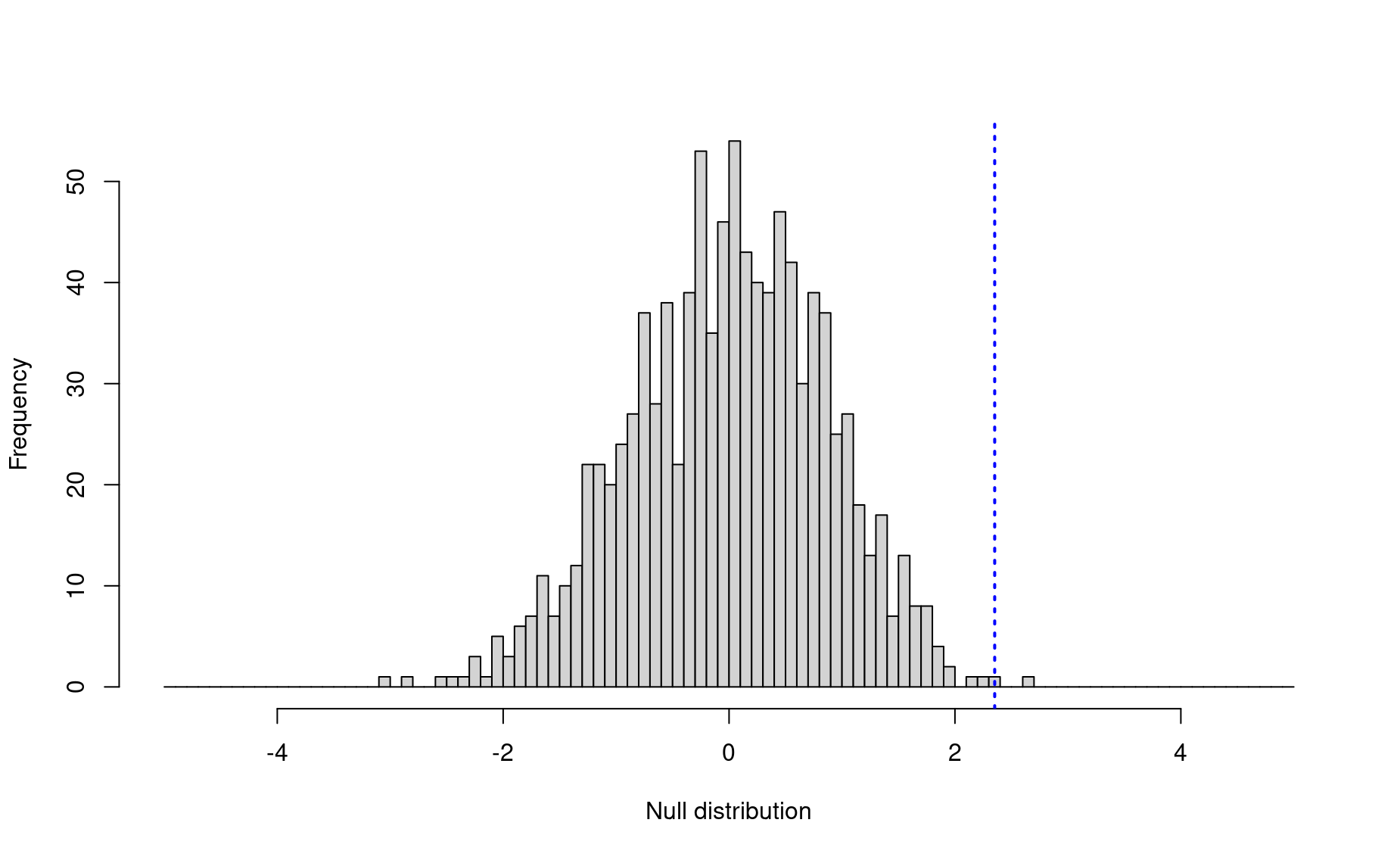 So there is indeed a significant difference in the annual site fidelity in the two populations! Bubble net feeders practice higher annual return rates than other whales (p = 0.001).

To perform a correlation analysis with randomization, let’s use a classic scenario from marine conversation: We have abundance estimates for a critically endangered porpoise from four years across two decades of research. This species only has a handful of individuals left in the wild. (porpoise-survey.csv)

Each row of this dataset is an abundance estimate from a survey that occurred within the vaquita’s range during a certain year. 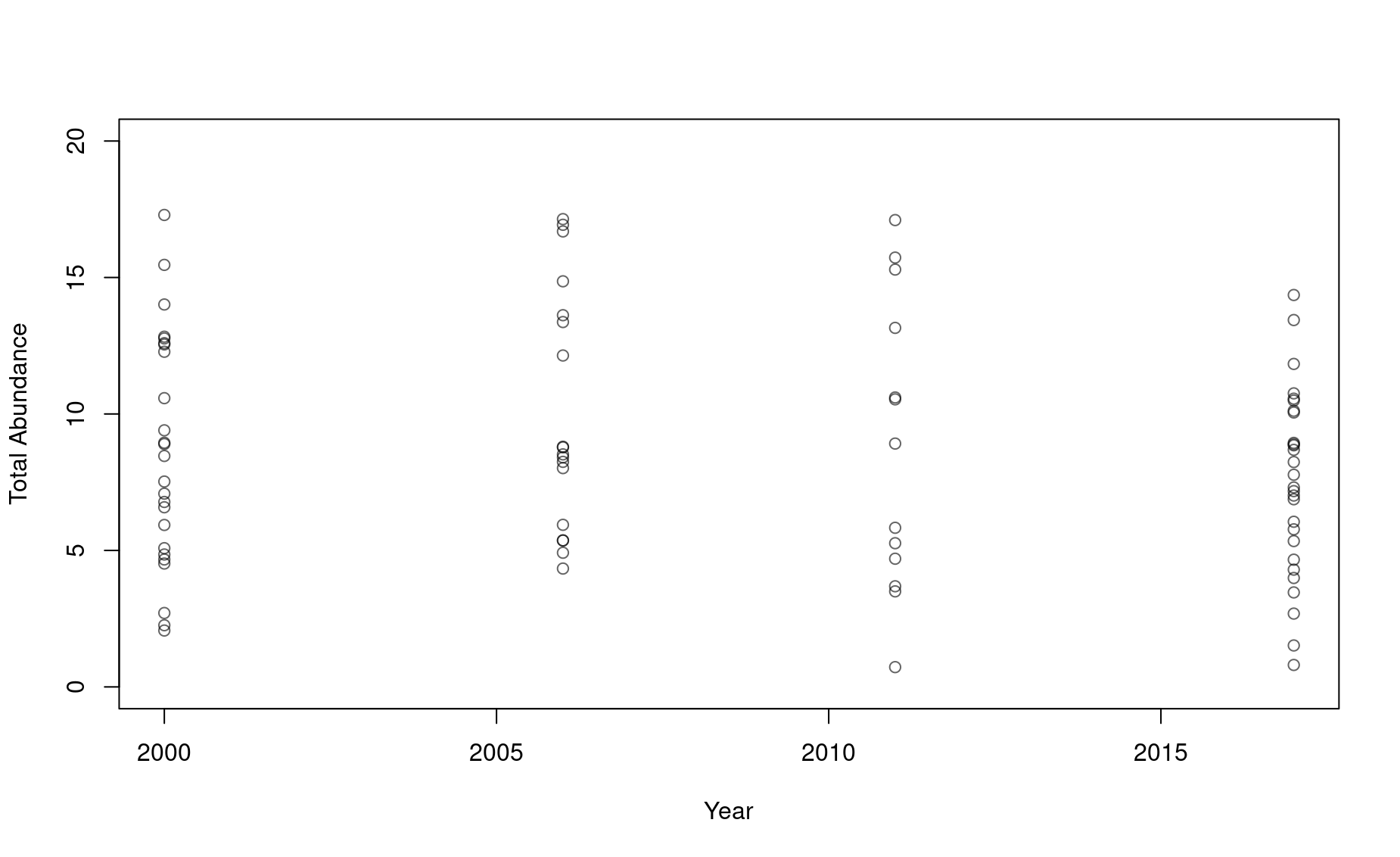 Performing a simple linear regression with this dataset yields the following results: 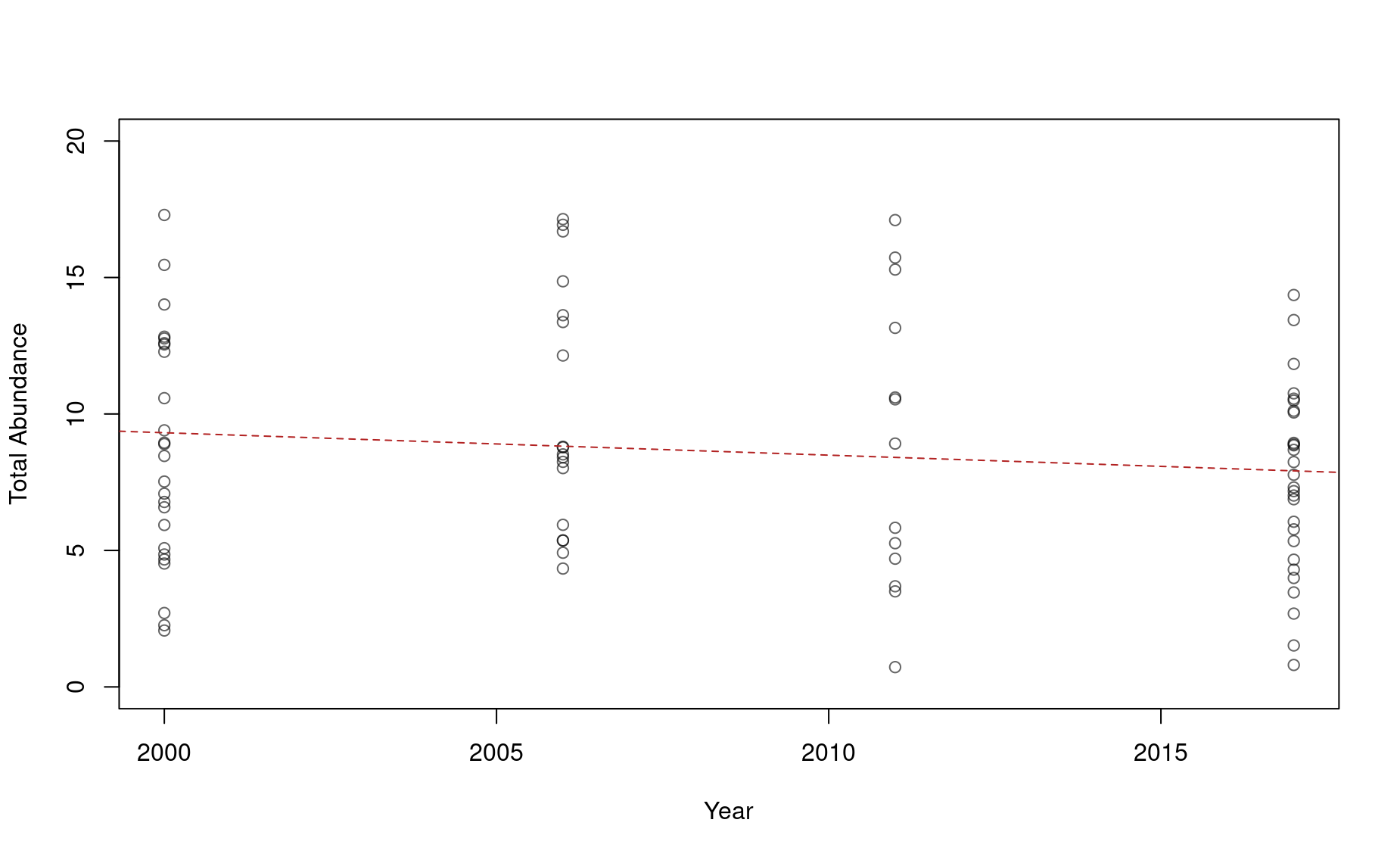 The slope appears to be negative, but the regression has a non-significant p-value (p=0.22) and a very small correlation coefficient:

These results may compel some conservation skeptics to stop worrying about the porpoise. “Yes, the population is small, but it appears stable, and there is no evidence that it is decreasing.” This is a situation in which using a randomization regression analysis could give us more information and help us speak more precisely about the risks to which this population is exposed.

Let’s go through the steps:

1. Research question: Is there a trend in porpoise abundance over time?

2. Null model: There is no trend; the abundance estimates might as well come from any given year and the trendline would look the same.

3. Function: Get the slope estimate for the time series. 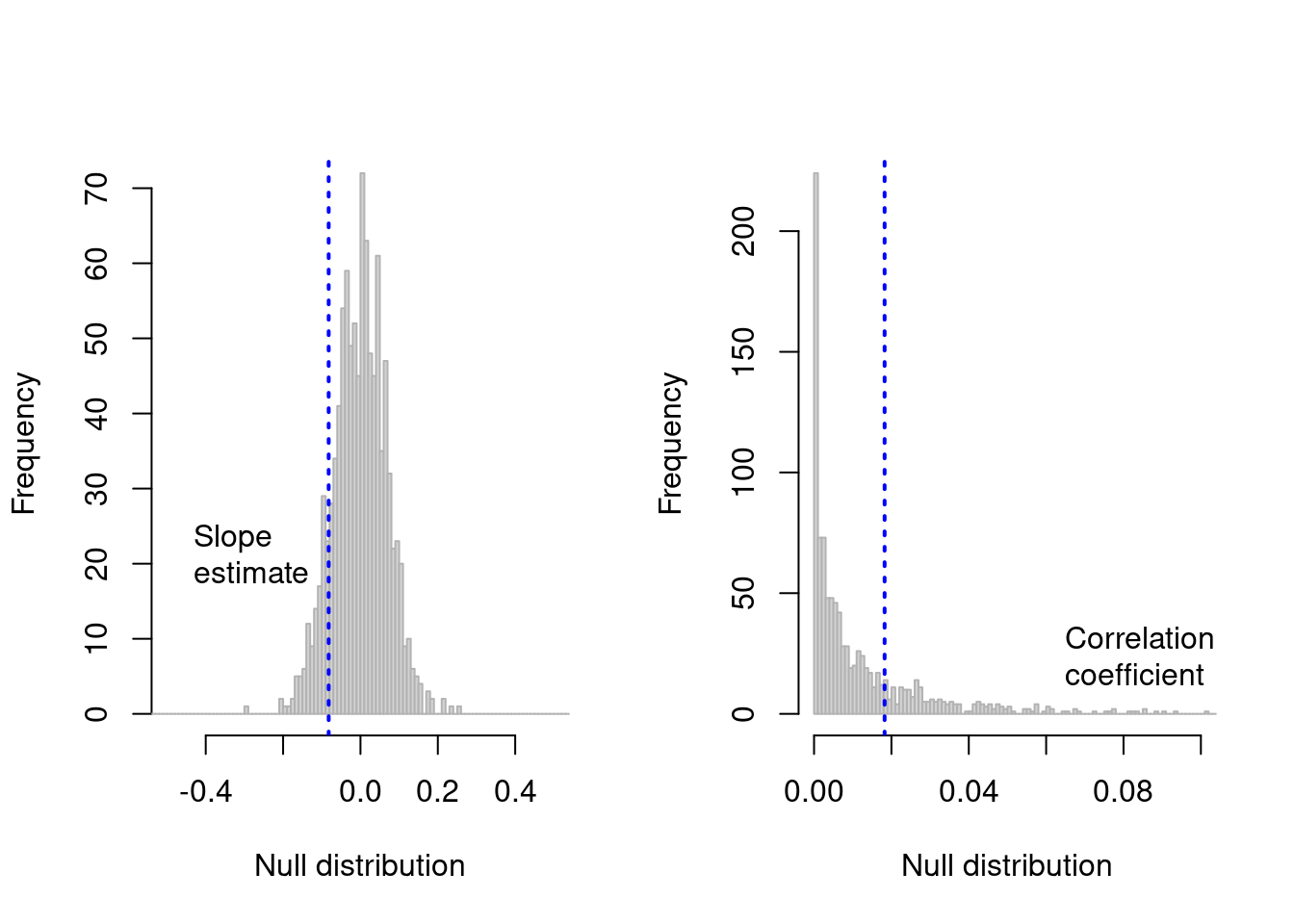 This indicates that the chance that the slope is lower than the null expectation is 87.9%.

This indicates that the observed regression is better than 77.9% of scenarios that might be expected under the null expectation.

4. Is the slope of a regression line negative?

Sometimes we have even less data about an endagered species. Let’s say we go out in 2021 for another porpoise survey and come up with these estimates from the species’ range:

We want to know what the chances are that the population has declined between 2017 and 2021. 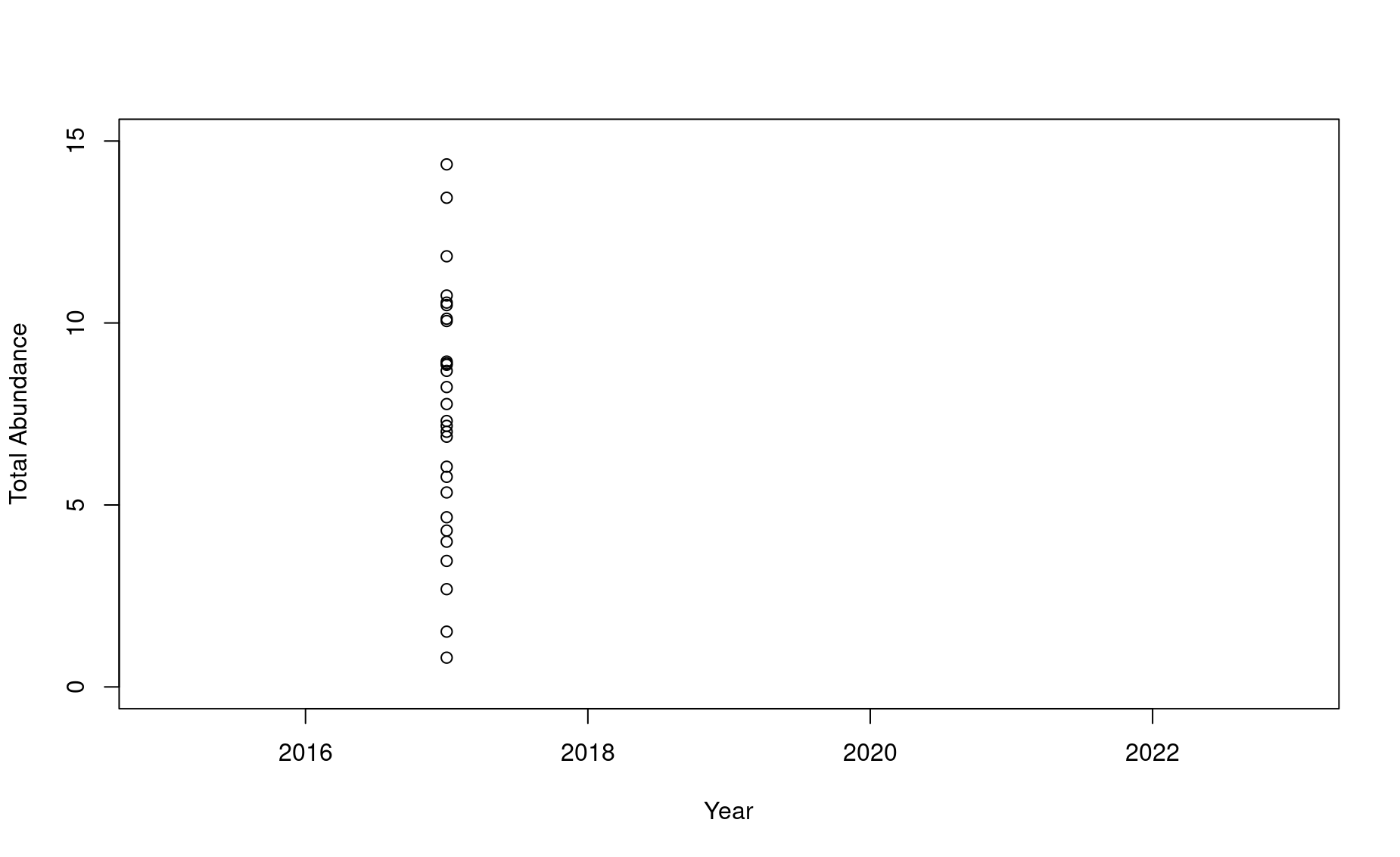 If this is all we have, what can we say about the status of this endangered species? With such a low sample size and so much variability, it can be really hard to produce significant or even compelling results. Well, what are the chances that this population is in decline? That is a question that a simple linear model cannot tell us.

In this case, our null model will be the distribution of differences of values drawn randomly from the two years’ datasets.

And in this randomization application, the workflow is a bit more simplified. We don’t need a core function, and we don’t even need a for loop.

(a) Do bubble net feeders have stronger social bonds?

Above we asked whether bubble net feeders exhibit higher year-to-year site fidelity to the study area than other individuals. What about their social bonds? Do whales known to bubble net feed tend to have more stable social associations than the others?

Make sure you are working with the correct data:

(b) Are bubble net feeders more closely related to each other?

In 2019, researchers took DNA samples from 36 individuals in this dataset. They collected the samples by flying drones through the whale’s spouts and harvesting DNA from their snot! GROSS!!! But also super RAD!

Using these genetic samples, the researchers determined the relatedness of each pair of individuals they sampled. Those results are provided in the dataset humpback-kinship.rds

And here is a key providing the IDs of these 36 whales and their status as a known bubble net feeder.

Use these datasets within a randomization routine to determine whether known bubble netters are more closely related to each other than they are to other whales.

Finally, let’s ask whether the strength of social bonds is generally correlated to kinship. In other words, is this population assorting according to relatedness?

For your convenience, the social association rate for these 36 individuals has also been summarized in the dataset humpback-sociality.rds.