We won’t go into statistical theory here. But every statistical test, at the basic level, is asking whether the patterns we observe in our data are actually meaningful. Are those perceived patterns reflecting real patterns, or is it possible to perceive those patterns when the underlying process is purely random chance?

Please note that there is nothing magical about this number – a p-value of 0.049 is practically the same as 0.051, but only the former would be considered significant. The 0.05 threshold is just a simple heuristic – a way of simplifying your statistical results into a binary concept: significant or not.

Finally, please also note that statistical significance is a tricky thing because it is influenced by both the patterns in your data as well as by the amount of data you are working with. A larger sample size is going to allow you to identify more nuanced patterns in your data, and those patterns will achieve a lower p-value thanks simply to the number of samples you have.

Conversely, a pattern driven by meaningful real-world processes can be obscured by low sample sizes. If your sample size is too small, you may not be able to produce significant p-values even though the pattern is real.

2. Continuous data represent numerical values. For example, let height be a variable representing numerical values for people’s height. Note that, for the time being, we will consider integers and count data to fall within this category.

Whenever you plot data or ask a statistical question, you are combining data types in a specific way: a bar graph, for example, compares two categories (i.e., the individual bars) of numerical data (i.e., bar height). And, by grouping the data by category, you are implying that the category to which a data point belongs has some impact on its value. In other words, the value is dependent upon the category. Conversely, the value is assumed to have no impact on category. Category, therefore is the independent variable.

Here is an overview of what we will cover below:

To practice basic statistics, we will create our own fake data.

Scenario: You are the lead author on a landmark study that investigates the portion sizes in fast food restaurants. You place 50 orders of large fries from one franchise and 50 orders from another, then weigh each order.

We can create a fake dataset by drawing numbers from random distributions:

So for now, let’s pretend we don’t know what the true means of these two sample sets are. Let’s pretend that all we have done is weighed and eaten a ton of french fries, and now we want to ask some research questions about our sample data.

First, Let’s look at our data with some histograms. 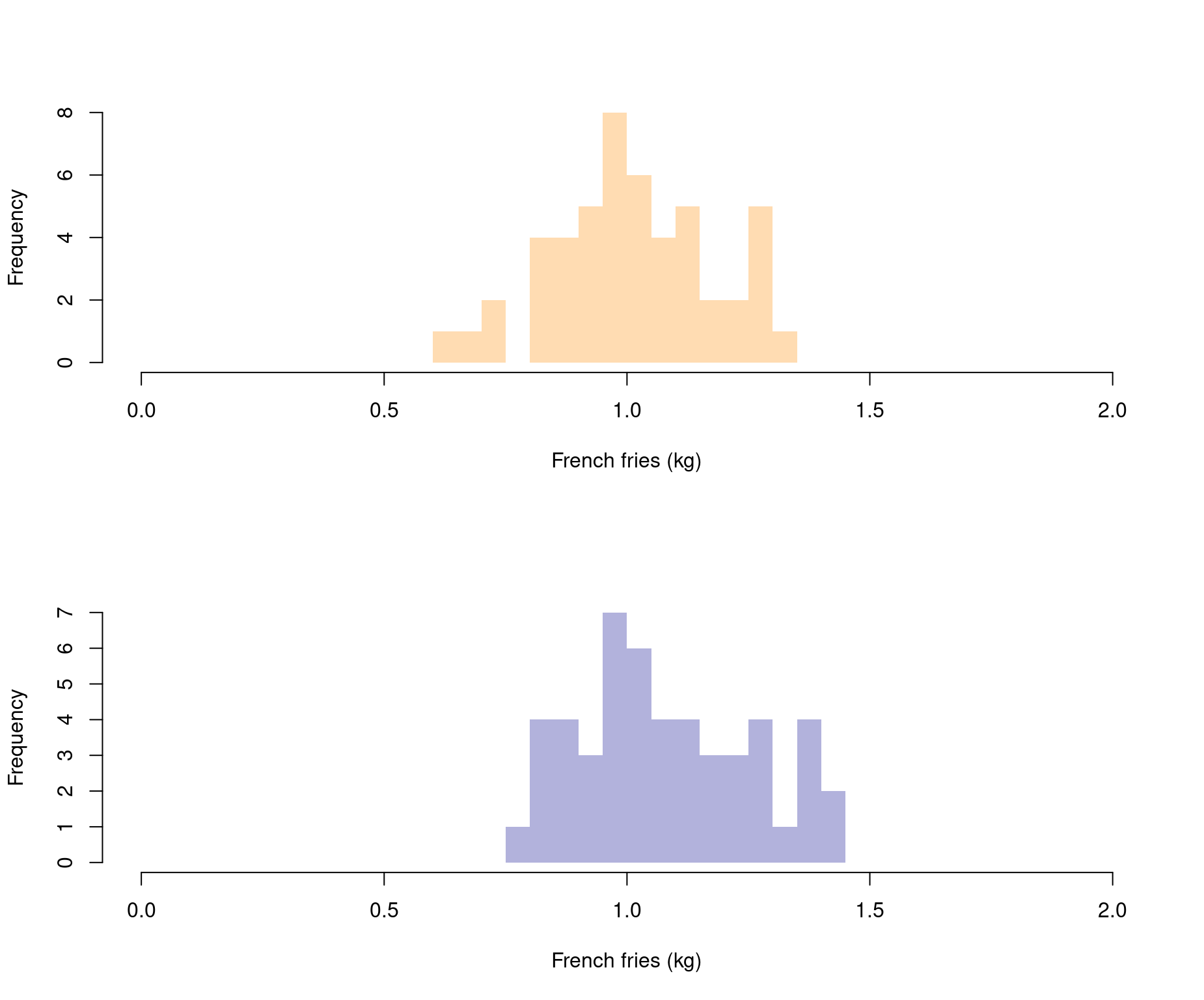 Comparison tests ask whether two distributions are different. It is often easier to gauge that difference when you superimpose one distribution on top of another (we do this by adding add=TRUE as an input in the second histogram). 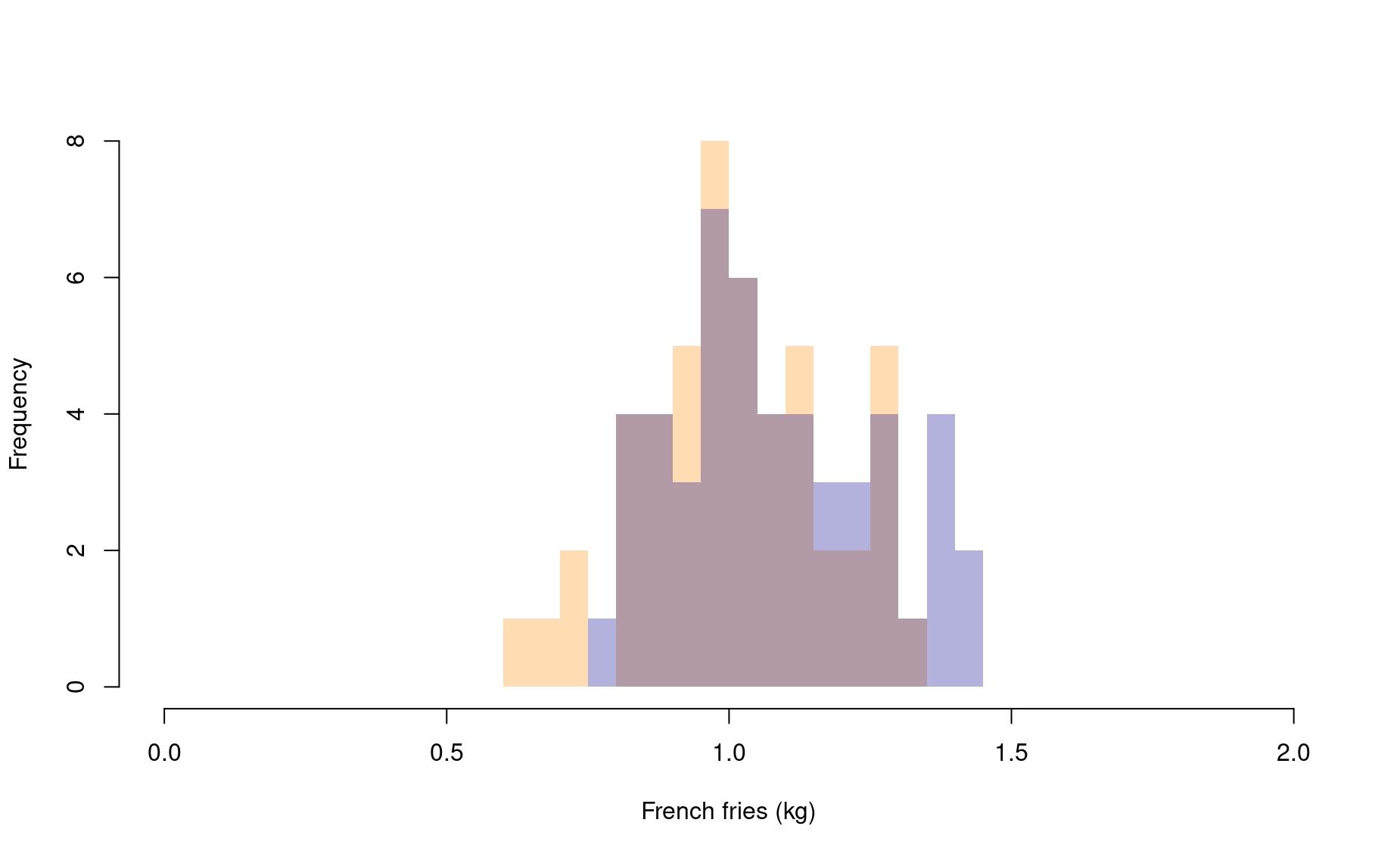 Okay, these two distributions certainly look a bit different, but there is also a high degree of overlap. If we lumped these data together and randomly picked a value from the pile, it would be hard to predict which franchise the data point belongs to.

To add to our uncertainty, maybe the pattern we are seeing here is just a vestige of our relatively low sample size. What if we sampled another 200 restaurants? Are we confident that we would find this same pattern?

Better do a statistical test.

Since these data are normally distributed, the test to use in this scenario is the t-test.

This function provides you with a p-value. Based on this p-value, what is your answer to the research question?

To highlight the influence of sample size on your statistical results, let’s re-do the analysis above, this time with a larger sample size. 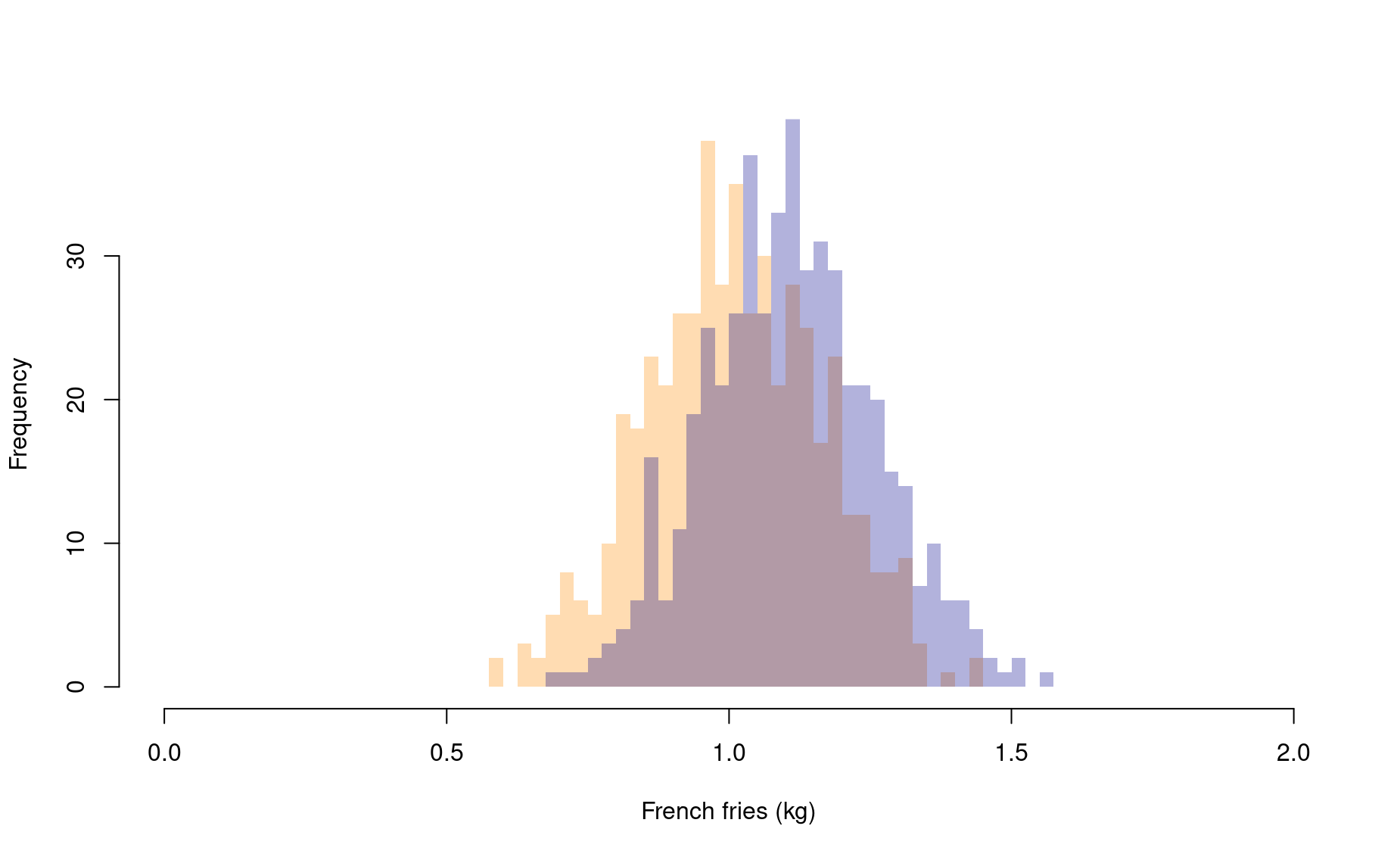 The p-value is now much lower! Note that we drew our samples from the exact same underlying distributions. But, since we drew many more samples in this second round, the t-test was better able to assess the significance of the differences we were seeing between the two sample sets.

When you are comparing numerical data in more than two categories, you need to use an ANOVA.

Let’s say you go out and sample a third fast food franchise: 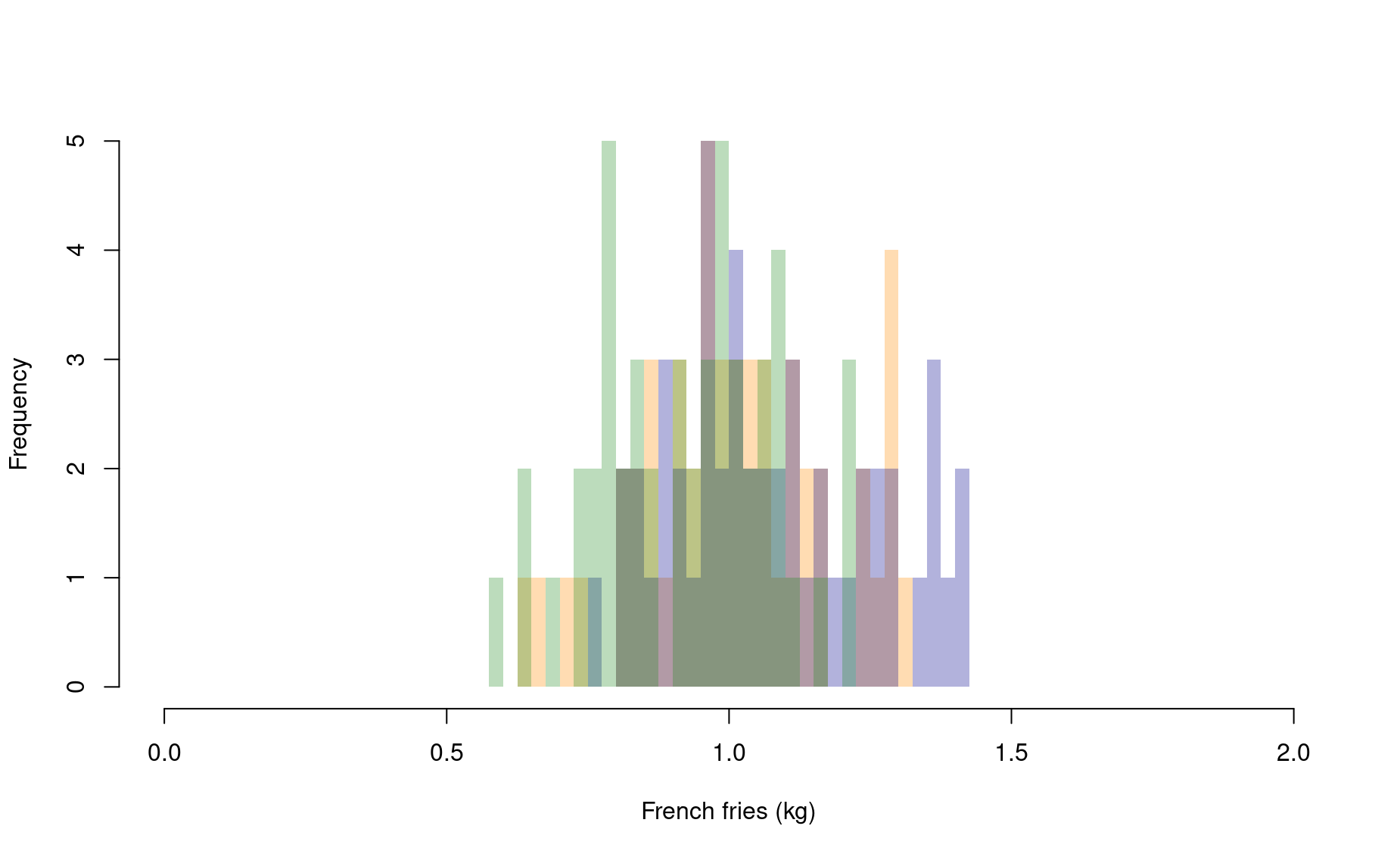 What a mess! This might be easier to read if we use a bar graph instead of layered histograms. (We will add 95% confidence intervals for each bar using the package DescTools – be sure to install this package before running this code). 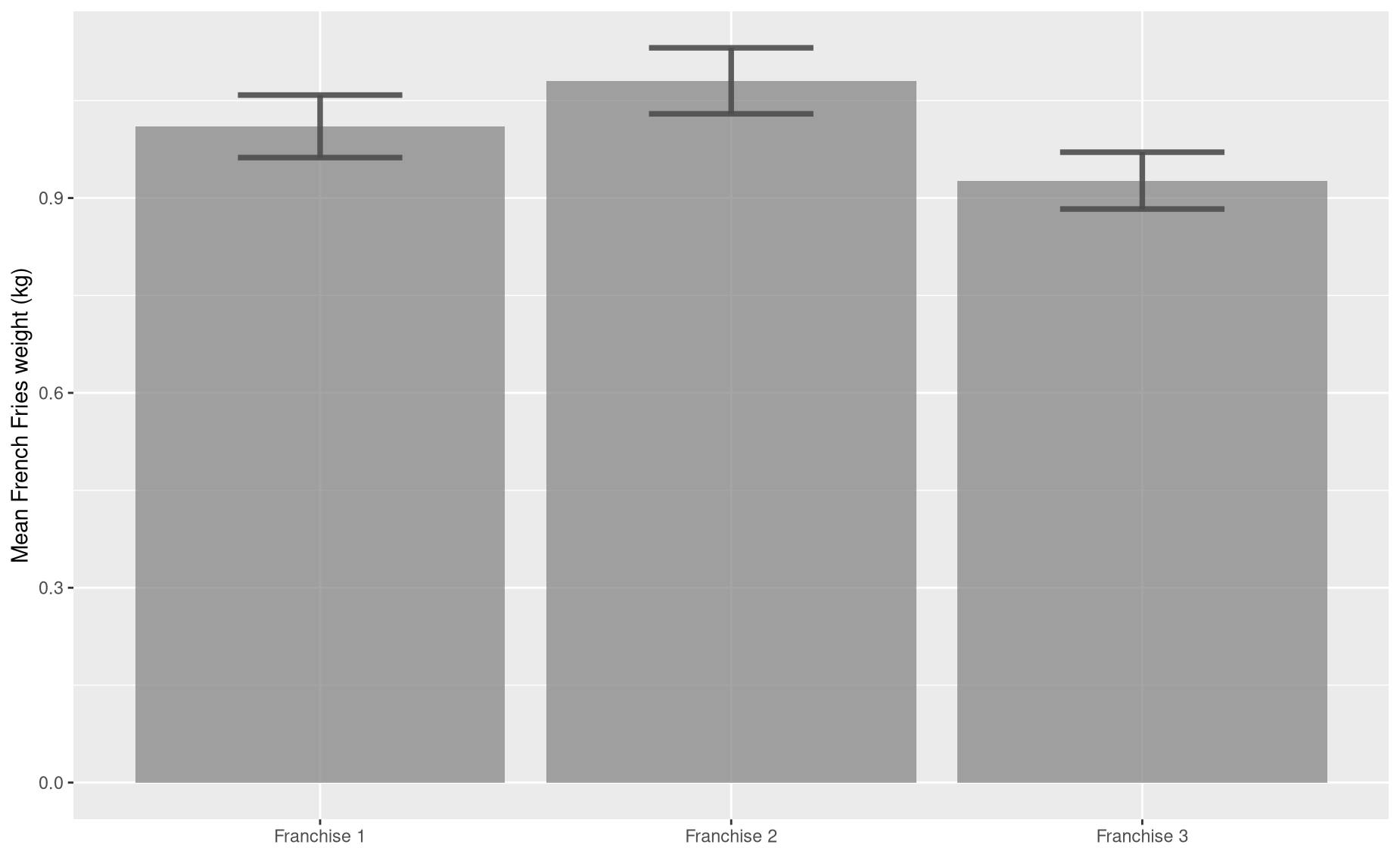 Bar graphs are easier to read, but they do throw about a lot of information. By reducing your samples to a single number (i.e., the sample mean), you are missing out on a lot of interesting detail. Which means that, even though these bars do seem to be of different heights, we better use a statistical test to be sure that these differences are significant.

When we are comparing more than two groups, our question becomes, “Are any of these groups different from one another?”

In R, the function for conducting an ANOVA test is aov():

Our p-value is low, which means there are differences between groups. But the ANOVA doesn’t actually tell us which of the pairwise (i.e., two-way) differences are significant. For that we need a follow up test: a Tukey’s HSD test.

According to this result, the only sample sets that are statistically different from each other are samples 2 and 3. This makes sense, given our low sample sizes and the innately small differences among the three underlying distributions.

Your colleagues have taken an interest in your fast food analyses. One of them wishes to work on an extension study regarding rates of Ketchip packet hand-outs. Is one franchise more likely to give you free Ketchup with your fries than another?

You go back to your notes and realize that you do indeed have data on ketchip handouts!

So you pass these data to your colleague and she uses them to produce this summary table:

This 2x2 table is known as a contingency table. It summarizes the interaction of two categorical variables (Franchise ID and Ketchip status). To test for differences in ketchup handout rates with these data, we would use a different test called a Chi-squared test.

Another colleague of yours wants to conduct a separate follow-up study: she suspects there might be a relationship between how many fries are included in an order and the perceived saltiness of the order. Her hypothesis is that each order is given the same volume of salt. When that salt is distributed across more fries, the perceived saltiness of each individual fry declines.

You go back to your notes and realize that you do indeed have data on perceived saltiness!

You pass your colleague the saltiness data associated with each sample you collected from Franchise 1. Saltiness is scored from 0 to 1.

Let’s check out this data. Since we are now exploring the relationship between two numerical variables, we visualize them with a scatter plot. 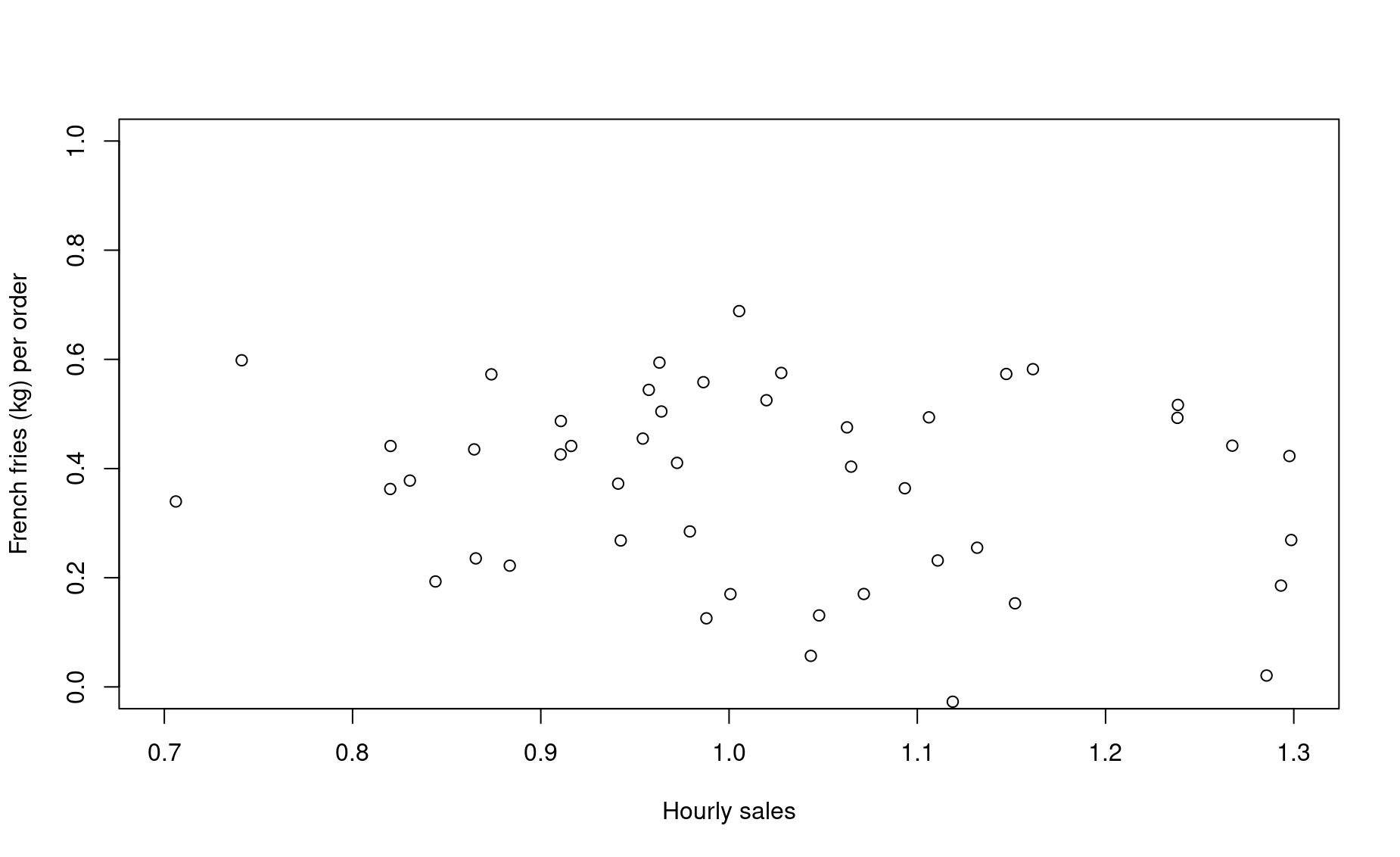 This plot, with French fries on the x-axis, visually implies that saltiness is a function of French Fries weight. Therefore, saltiness is treated as the dependent variable.

Huzzah! First, let’s add this trend line to our plot: 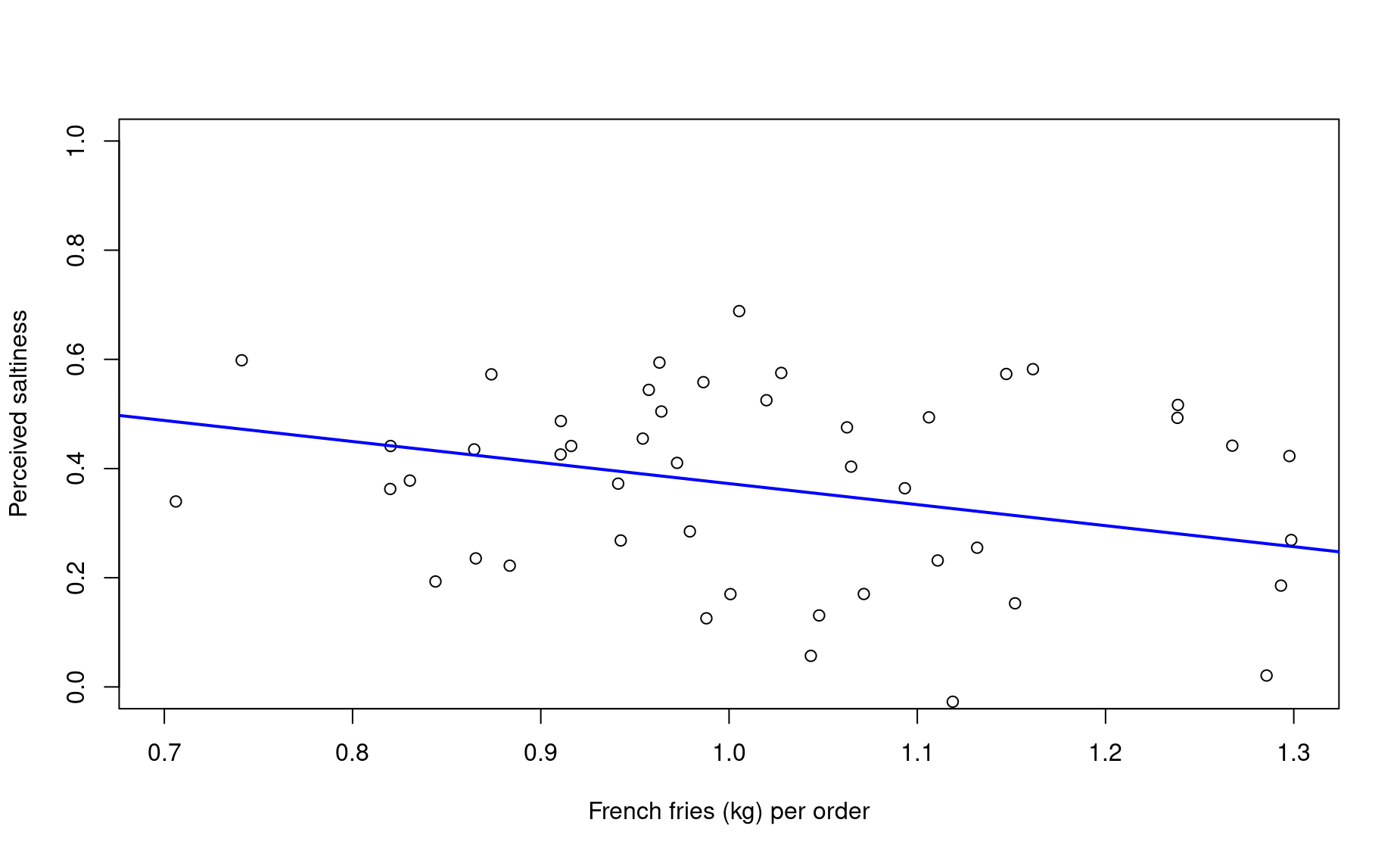 Let’s interpret the outcome of this linear regression:

When you report the results of your statistical tests within your reports and figure captions, be sure to include the following information:

For tips on writing these results statements, see the Module on Writing Style for Reports.

To review these concepts, we will use the same dataset from the previous module: AirBNB hosts in Amsterdam.

Two neighborhoods in Amsterdam, “Bos en Lommer” and “Centrum-Oost”, are among the most popular AirBnB destinations in the city. But are these two neighbourhoods equally affordable, or does one neighborhood tend to be more expensive?

(a) First, produce a single histogram with the price distributions of listings from these two neighborhoods superimposed upon one another. 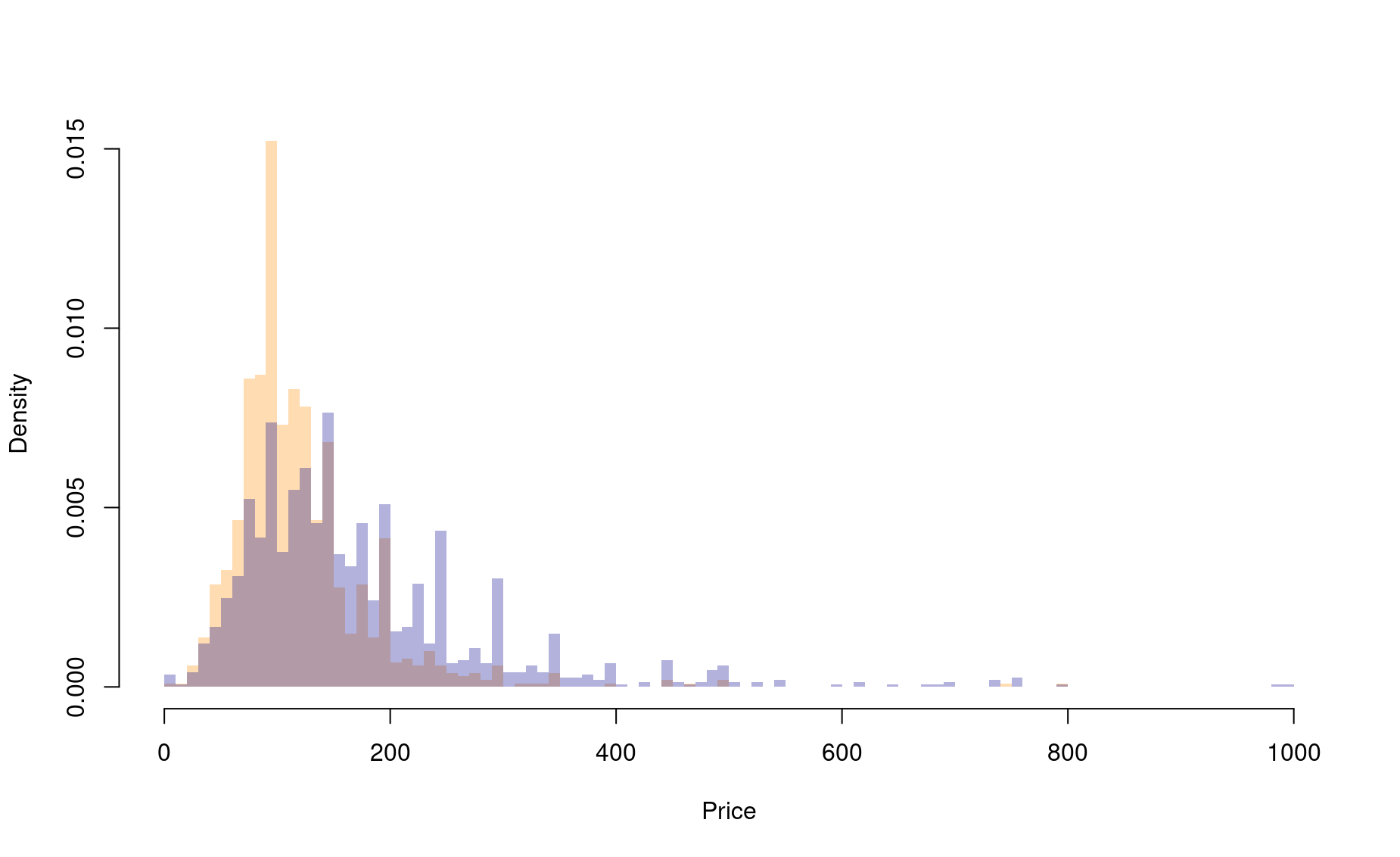 Which neighborhood is more likely to offer a Private room instead of an Entire home/apt?

(a) First, produce a single bar graph with the number of room types offered in each neighborhood.

Do listings with more reviews tend to be more expensive? For this analysis, focus on listings priced less than $500 and less than 400 reviews.

(a) First, produce a single plot that properly visualizes the data. 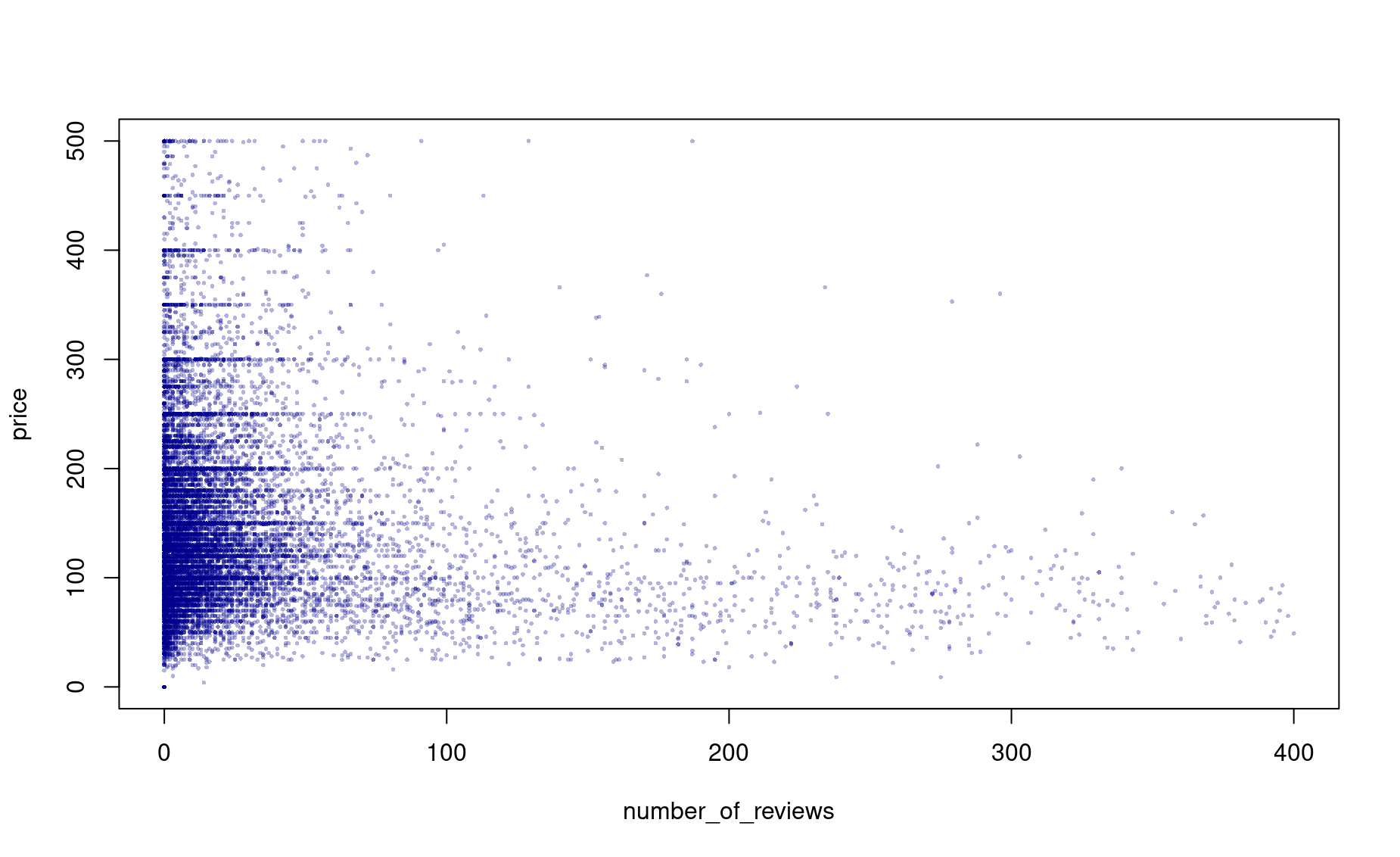 (c) Add this trendline to your plot. 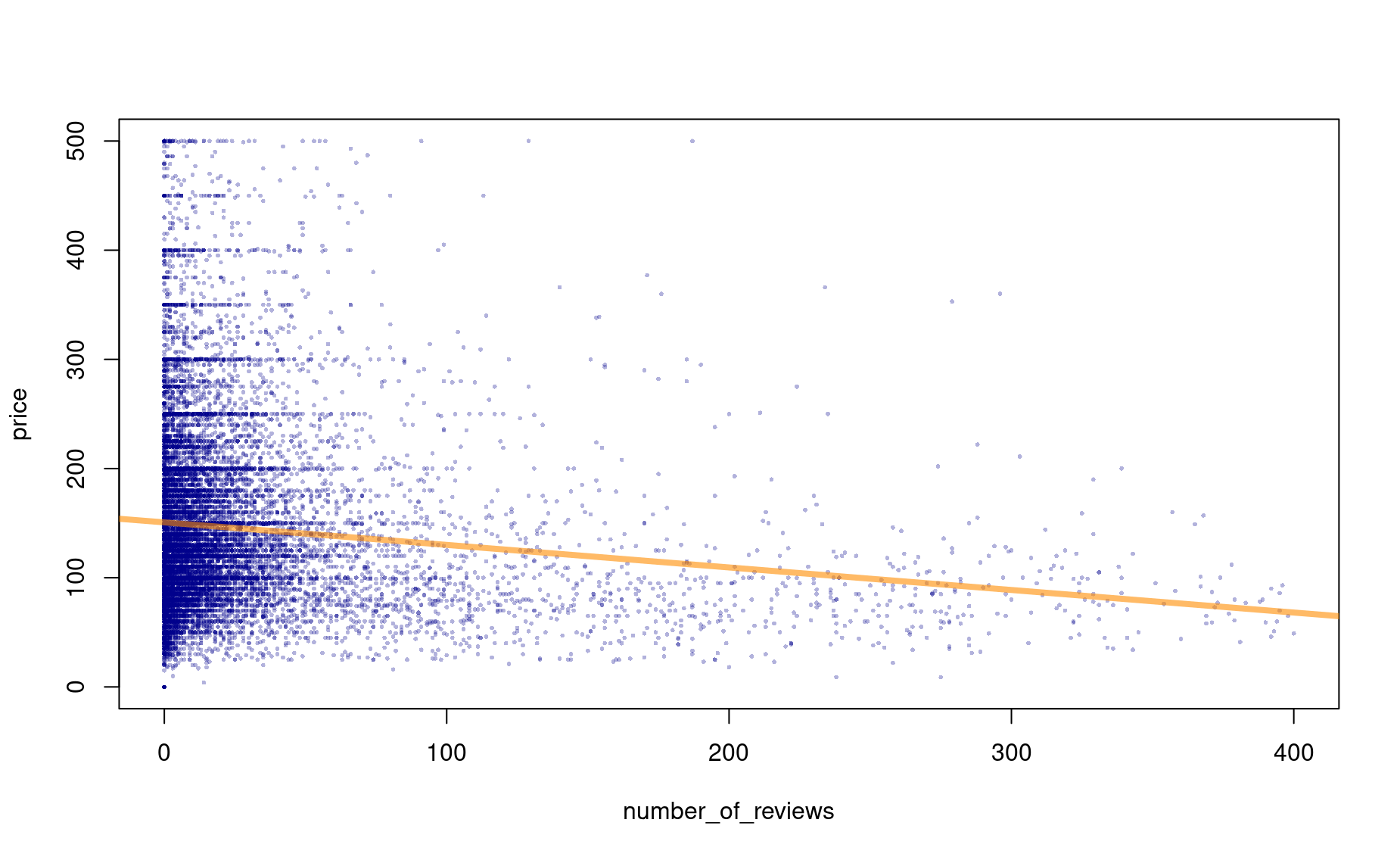 Let’s change datasets. Read in a dataset of information about passengers aboard the RMS Titanic by using this code:

(a) Did women pay more than men? Conduct the appropriate test and write up a complete results statement.

(b) Make a variable called rich. It should indicate (boolean) whether someone was first class or not.

(c) How many rich people were there?

(d) Does one sex tend to be richer than the other? Carry out the right test and write up the results.

(7) Use dplyr verbs to get the number of survivors and total people among both men and women. With the result, choose the right test to ask whether more women survived than men.

(8) Make a basic linear model in which the outcome “Survived” is a function of “Sex”.

(9) Adjusting for passenger class, did women die more than men?